The Effect of Origination Growth on Quality: An Empirical Analysis of Loan Vintages

When GROUNDFLOOR was just getting started five years ago, critics and cynics objected with what we nicknamed “the Groucho Marx problem” -- i.e. the idea that no borrower we wanted would ever accept a loan from us. Granted, it was true back then that we were limited in the size of loan we could fund, the rate we could offer, and the time it took to close.

As we addressed those limitations by qualifying our offering with the SEC and raising our first round of venture capital funding in 2015, new critics emerged to say that while we might be able to lend in a local market at a small scale, we could never lend nationwide in very large numbers without compromising loan quality. In 2016, we set out to build a lending operations team (including risk management, underwriting, and asset management) with the professional expertise, policies, tools and processes to do just that. Our aim was to improve loan quality and volume simultaneously, well beyond our home market.

We’ve been lending for four years now, and lending extensively in non-Atlanta area markets for just over two years of that time. As our 2017 Year In Review indicates, volume has grown significantly.

With another year of growth ahead, it’s a good time to ask: How have we done?

To answer that question, we analyzed loans repaid and still outstanding that we originated from January 2014 through June 2016 (Vintage A), and compared it to loans originated during the period July 2016 through December 2017 (Vintage B), excluding loans that were originated since July 2017 that haven’t yet reached maturity. Excluding those loans avoids skewing the performance in GROUNDFLOOR's favor, since it’s too early to know how well they will ultimately perform. The repayment status for both vintages is reported and measured as of 12/31/2017, except where noted.

Vintage B, by contrast, is composed of 222 loans that were originated following our addition and application of greater lending expertise. This vintage is more than 2.5X larger, and was originated over the course of 24 months (two years, a 20% shorter period of time).

Our loan vintages A and B

There are two main ways to measure performance of a loan portfolio. First, and most importantly, investors want to know what yield the loans delivered. How large were any losses relative to the expected yield? Many investors are willing to accept losses on a portion of loans in a portfolio, so long as those losses are sufficiently offset by yield realized on loans that do repay in full.

Here is a comparison of net yield on repaid loans from Vintage A and Vintage B: 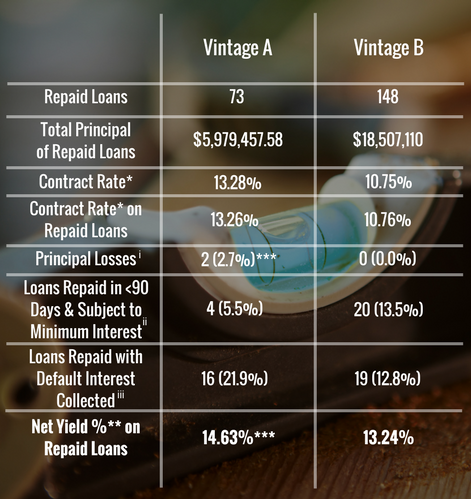 The difference in contract rate between the vintages is significant. The decrease from Vintage A to Vintage B is partially attributable to the ongoing compression of yields in the lending market we serve. A more important influence, however, has been a strategic choice to pursue the best and most experienced borrowers by decreasing rates over time. We will comment on these dynamics in greater detail in a future post.

In addition to net yield, investors use on-time payment metrics as another indicator of portfolio performance. All loans originated in both vintages are deferred payment loans. That means no payment is due until the loan matures, i.e. until its final payment due date. GROUNDFLOOR has recently introduced monthly payment loans as a new product. Future analyses will therefore take a look at the ongoing payment performance of those loans as a group, but there were no monthly payment loans in either of these vintages.

For each vintage, we analyzed when loans repaid in relation to their maturity dates. Here is a comparison of the timeliness of repayment for Vintage A and Vintage B, with percentages provided to break down the share of repaid loans. 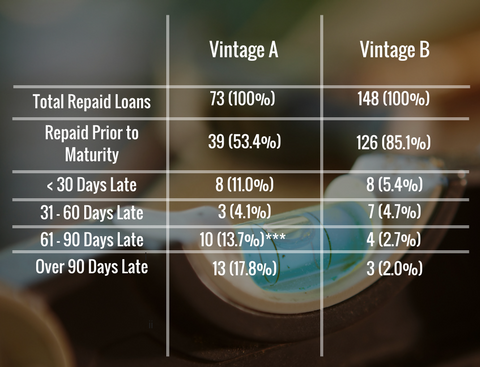 Timeliness of repayment for Vintage A and Vintage B

Going further, we also re-ran the analysis to include loans that were still outstanding from each vintage as of December 31, 2017. To get the cleanest (toughest) measure possible, we excluded 46 outstanding loans that had not yet reached maturity (no credit for those!), but included 28 that were outstanding but past maturity (because, hey, they’re late!).

Here’s how it breaks down, in summary -- so it’s clear what we’re counting and what we’re not: 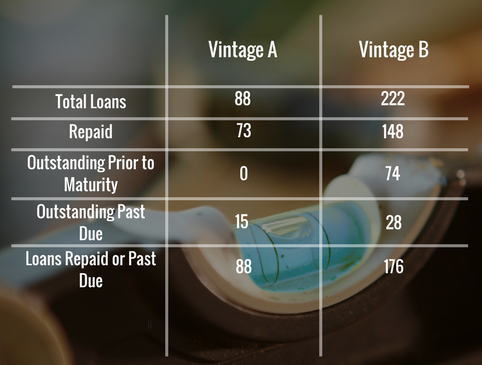 Metrics for outstanding loans from Vintage A and Vintage B

The denominator we’re using to assess the current state of our performance, Line 5 above, is Line 2 plus Line 4, or if you prefer Line 1 minus Line 3, plus Line 4. Here is a snapshot of the situation as of December 31, 2017: 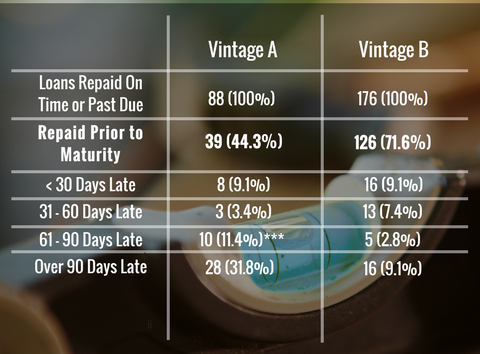 Our improvements in risk management, underwriting and asset management are making a big difference for GROUNDFLOOR investors. Despite more than doubling the rate of originations, on-time repayment (Repaid Prior to Maturity) is up over 27% to 71.6% from 44.3%. Even if every outstanding past due loan in Cohort B went 90 days late or more, which is highly unlikely if theoretically possible, we’d still realize a 6.8% improvement in loans over 90 days late (from 31.8% down to 25.0%).

Even more significantly, despite significant growth in origination unit volume, our lending operations team has returned capital on 148 loans in Vintage B with no loss of principal, while delivering a net yield of 13.24% on average in that same vintage.

The data quantifies what we have already heard from many of you. GROUNDFLOOR has made significant improvements in lending and asset management since 2016. Indeed, those improvements were recognized by our first institutional whole loan buyer who signed with us after completing several months of due diligence on our personnel, policies, processes and portfolio.

Even so, we’re not stopping here. We realize there is still progress to be made and that there is always room for improvement. As we continue making investments in our technology, processes, policies and talent, investors can and should expect even more consistency and reliability in everything we do.

GROUNDFLOOR will continue to grow in 2018, but we won’t stop improving -- and sharing the data that shows how we’re doing. Soon, we plan to publish more information about how we underwrite and manage the loans we originate and an analysis of our accuracy in predicting the ultimate sale price (the “After Repair Value” or ARV) as an output of the process. Keep an eye on the GROUNDFLOOR blog and your email for our next article, and use the comments below to let us know what else you’d like to hear about.