On The Ground With Groundfloor's Jeff Seal

Get to know the people behind the platform! Meet Jeff Seal, our Director of Originations. He sat down with us to talk about his role, how he found Groundfloor, and the many hats he's worn while working here. 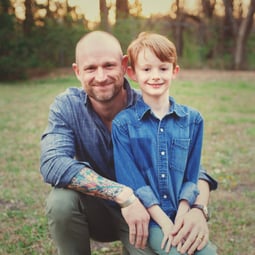 I am the Director of Lending Operations. My role is to support our Business Development Managers as best I can. I like to say that my goal is to originate nothing but know about everything -- I am here to supervise and manage our loan originations and to jump in as needed. I also oversee our joint ventures with brokers and referral partners.

I’m originally from Fort Smith, AR. Growing up, I was really into speed skating and became a real “rink rat,” so much so that once I turned 18, I moved out to skate professionally. I lived with my coach and trained as a part of the professional in-line skating team, during which time I won several national medals and set a few records. At one point I was ranked in the top 10 of in-line skaters in the country for the last couple of years in competition!

Currently, I live in Wichita, KS which is where my wife and her family resided. After meeting in Tulsa, OK we married and promptly moved out west to Portland, where we spent a little over a year. However, we spent much of our time traveling back to the Midwest to see friends and family. This really drove our desire to move back to Wichita, which is where we’ve been for 14 years now.

While there were a couple different directions I could have gone with my skating career (for example, had I chosen to transition to ice skating, I might have had a shot at making the Olympic team -- I have a few friends who’ve won Olympic medals), I decided I was ready to move on. I ended up finding my way into the real estate industry on the finance side around 2006.

After the housing crash in 2008, I shifted from focusing on real estate finance to working in default servicing at an auction house. As you can imagine, there was no shortage of work to do as the foreclosure boom hit its peak. I found that I really loved the fact that you could buy something like real estate on an auction platform, and that the value of a property could be governed by the market rather than real estate appraisers or agents. However, I realized that what was missing was the financing part of the equation -- it’s hard to play within the fast-paced auction space when you don’t have a readily-accessible source of funding. Financing was also more sustainable than foreclosure auctions. While the foreclosure market was hot in the aftermath of the Great Recession, I knew it would eventually ebb -- but people would always need financing.

Around 2013, I met Noah Martin with MMREM, an asset management firm, and I left the auction house to begin working with him in the real estate finance space.

I was connected to Groundfloor via my previous employer Noah Martin -- he was the one who introduced me to the hard money lending industry. In 2015, I joined the Groundfloor team as Director of Account Management, but ended up leaving the company a few months later to start my own brokerage firm. To be honest, I blame that on Brian! I’d never really been bit by the entrepreneurial bug, but watching Brian maneuver through building the company was awesome and really inspiring. I decided to try it out for myself. So, I left to start my own company. My intention was always to partner with Groundfloor and support their work by brokering loans for them.

When COVID-19 hit, I lost funding from my primary funder, which forced me to drastically cut my business operations. I reached out to Patrick [Donoghue, VP of Operations], who I’d remained in contact with, to discuss what coming back to Groundfloor might look like. Long story short: I was welcomed back with open arms. Additionally, I was also able to bring along four of my previous employees with me, which made the transition even more ideal and demonstrated how committed they were to supporting my work.

You’ve worked for Groundfloor in a few different capacities at this point -- can you talk a bit about what all of your roles with the company have been?

I’ve definitely bounced around a little bit during my tenure here! My first role with the company was in sales. I left to become an independent broker, then was hired back at the end of 2020 to help manage Groundfloor's broker relationships. I was in this role for about 6-7 months and performed really well -- in fact, one month I closed 40 loans! Groundfloor recognized the value I was bringing to the company and promoted me to Director of Originations earlier this year. It’s been a fun ride and I appreciate all the great support I’ve received.

One thing I love about Groundfloor is that we are not afraid of change. We’re not committed to just doing things the traditional way. Instead, we’re always asking ourselves questions to better who we are and how we do business. Because of this, I feel that Groundfloor is very receptive to employee input and feedback -- I’m someone who generally is always on the lookout for ways to improve, and I really feel like my voice is heard here. No matter who I am talking to, I always feel that my opinion is valued, considered, and respected -- which in turn makes me feel supported and appreciated. I’d go to bat for Groundfloor any day because it’s a company I believe in and feel valued by -- and these days, that’s not so easy to come by!

I love that Groundfloor isn’t an “origination shop” -- the whole premise behind Groundfloor is something greater than just trying to make money and close deals. We’re not borrowing money from Wall Street or big institutions to get things done. Instead, our capital is sourced from regular folks. It feels really full circle -- our platform enables the same people that borrow money from us to also invest money and fund projects. It feels like more of an ecosystem where people never have to cede control over their money. There’s a kind of poetry involved -- but with good profits! 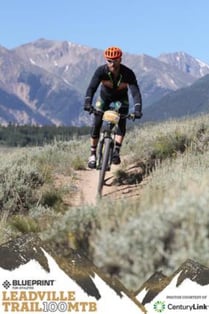 I think the two values I’d name are agility and authenticity. I think agility is a really important Groundfloor value, not only because of how and where we’ve sourced our capital but also because we aren’t afraid of changing something up and doing something different if we think it will be better. We’re not tied to one standard operating procedure. A good example of this is how we handled the halt of institutional lending last year during the onset of COVID-19. When institutional capital pulled back, we quickly transitioned to a 100% retail-based capital model, which enabled us to continue lending and growing our company through the height of the pandemic.

Authenticity is also a crucial component of how we do business at Groundfloor. This extends to our customers as well as to how we function as a team. I love that I never have to question what Brian [Dally, co-founder and CEO] and the executive team are thinking. Same goes for the people I work with on a daily basis. I think it really speaks to the caliber of the people who work here and to the culture of our company. 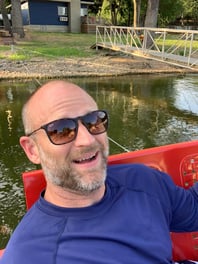 How have you been staying sane during quarantine? Any fun “quarantine projects?”

We are fortunate enough to have a small lake house with a private dock, so we’ve spent a lot of quarantine time there enjoying the lake! My personal outlet is physical activity, so I’ve leaned into that as well during this time. I’m actually getting ready for a big cross-country bike trip in October to support a refugee-focused nonprofit I’m involved with. It’s an eight-day ride, going from San Diego to St. Augustine, and I’ll be riding with seven other cyclists. I’m looking forward to it!

Thanks so much, Jeff! We appreciate all your hard work!

On The Ground With Groundfloor's Mckinney Holland

Invest
Borrow
About
© 2023 All Rights Reserved