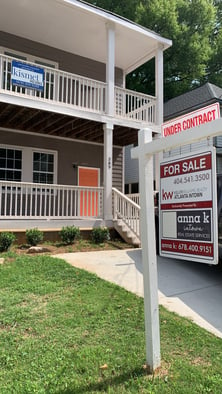 Since our inception, we’re proud to have successfully funded over 420 real estate projects around the country, with more coming in every month. While each property is stunning in its own right, we especially love when our developers are recognized for the hard work they do. Greg Mortimer, one of our local Atlanta real estate developers, was recently highlighted on Curbed Atlanta for his work transforming a long-vacant Mechanicsville eyesore into a lovely and functional home.

Mortimer and his company, Kismet Holdings, stumbled upon the two-story downtown property through a professional contact. The home had been sitting vacant for over 10 years and had suffered from neglect, theft, and a host of squatters. Nevertheless, Mortimer saw an opportunity: “It was a nice piece of property in one of the city’s transitional, up-and-coming neighborhoods,” he states. “We decided to go for it.”

It was an uphill battle from the start. “We had to remove two dumpsters’ worth of trash before we could even begin to think about renovations,” Mortimer recounts. Then, there was the house itself. After acquiring permits, Mortimer partnered with city inspectors to create a comprehensive plan of attack. Since the property had become dilapidated after sitting abandoned for over a decade, Mortimer and his team realized they’d have to essentially start from scratch, tearing down the damaged and outdated structure to rebuild it in accordance with current regulations.

But despite the challenges it posed, Mortimer remains particularly proud of this project.

“We were not the first people to attempt to fix this house up -- in fact, we were the third or fourth team to try,” he reveals. But the neighborhood was ready, welcoming them with a reception Mortimer describes as “incredible.” Neighbors were excited and supportive from the start, coming up to Mortimer and his team and thanking them for improving their neighborhood.

“Another neighbor brought over his lawn mower and just started trimming the grass for us because he was so excited this property was finally getting fixed up,” Mortimer recounts. “We’ve even gotten some hugs! This has been by far the warmest reception we’ve ever been met with.”

Too often, he says, people forget that house flipping isn’t always about making a quick buck -- it’s also a way to transform neighborhoods for the better. With the Mechanicsville project, Mortimer says, he’s seen this process first-hand. Not only did the flip help reinvigorate the community by fixing up a run-down property, but it also has (finally!) attracted buyers. According to Mortimer, a first-time homebuyer couple is closing on the house today (July 11).

“It’s just so neat to see how you can improve neighborhoods,” Mortimer finishes. “We’re excited to keep doing this for years to come.”

Relevant numbers and statistics for the house: