In July, we published an analysis quantifying the effect diversification had on the range of returns realized in the portfolios of over 2,400 Groundfloor investors up until that time. With 2017 now behind us, we’ve updated and enhanced that analysis. The data now includes 2,950 portfolios, with over 209 loans repaid representing $21 million in principal invested.

As we wrote at the time:

THE EFFECT OF DIVERSIFICATION ON PORTFOLIO RETURNS 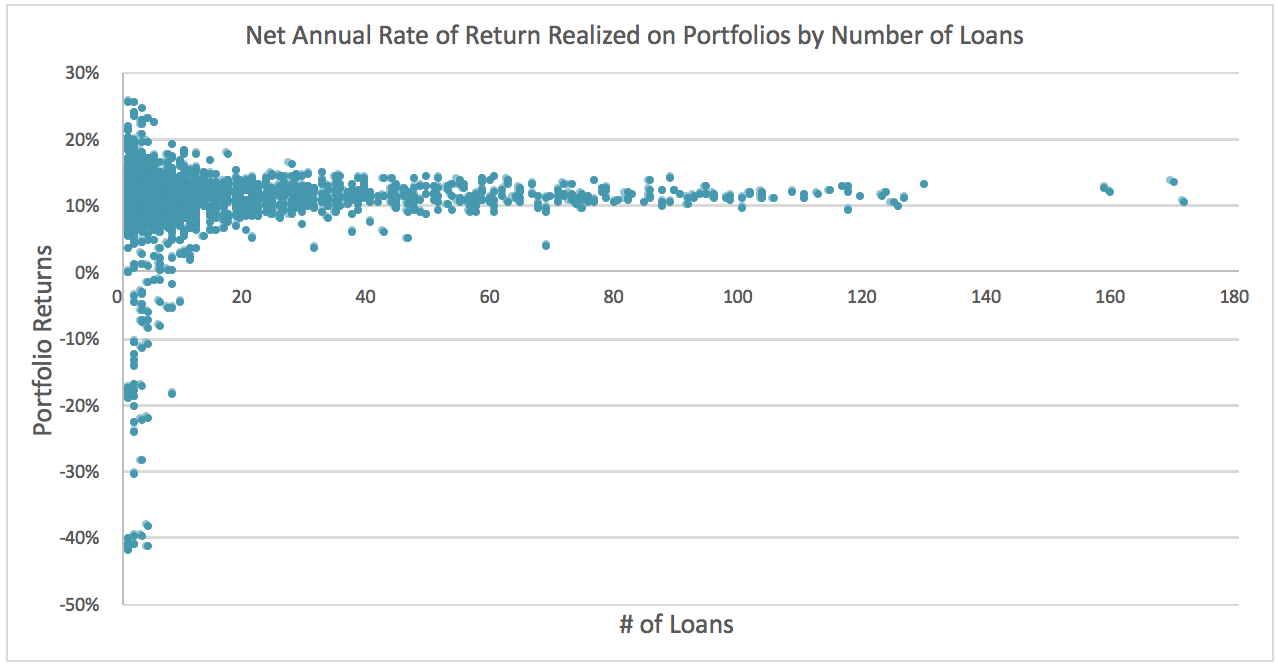 This chart shows the relationship between portfolio returns realized and the number of loans held in each portfolio. Each dot represents a portfolio containing a number of loans (plotted along the x-axis) and having realized a given annualized rate of return (plotted along the y-axis). For reference, our analysis shows that a hypothetical model portfolio composed of an equal investment made in all 209 loans repaid to date would've earned an annualized net return of 11.79%. All portfolios containing more than 10 loans realized a positive return.

For this analysis, we maintained the same method of calculating portfolio returns. As we described it in July:

We calculate portfolio returns by dividing the amount of interest earned for each investment by the amount of principal invested, and then annualizing that figure. Each annualized return is then weighted by the amount invested as a proportion of all principal invested in the portfolio. Reinvestments are accounted for as new, separate investments. Balances held as available cash in Groundfloor Accounts are not included in the analysis, since they are not invested and can be withdrawn upon demand.

Once again, as the theory of diversification predicts, portfolios invested in the largest number of loans realized the most reliable returns. This is true even though Groundfloor investors, unlike investors in REITs or other funds, decide not only which loans to include in their portfolios, but how much capital to allocate to each loan, relative to the others. The power of diversification is that strong.

This chart also shows the risk of not diversifying one’s investments. A small number of portfolios at the extremes put all their eggs in a few baskets. Portfolios containing only a handful of loans or less realized a wide variety of returns, including some significant losses for those who bet big on our one high-yield (23.8%) F-grade loan that lost principal.

THE EFFECT OF DIVERSIFICATION ON LOSS RATIOS 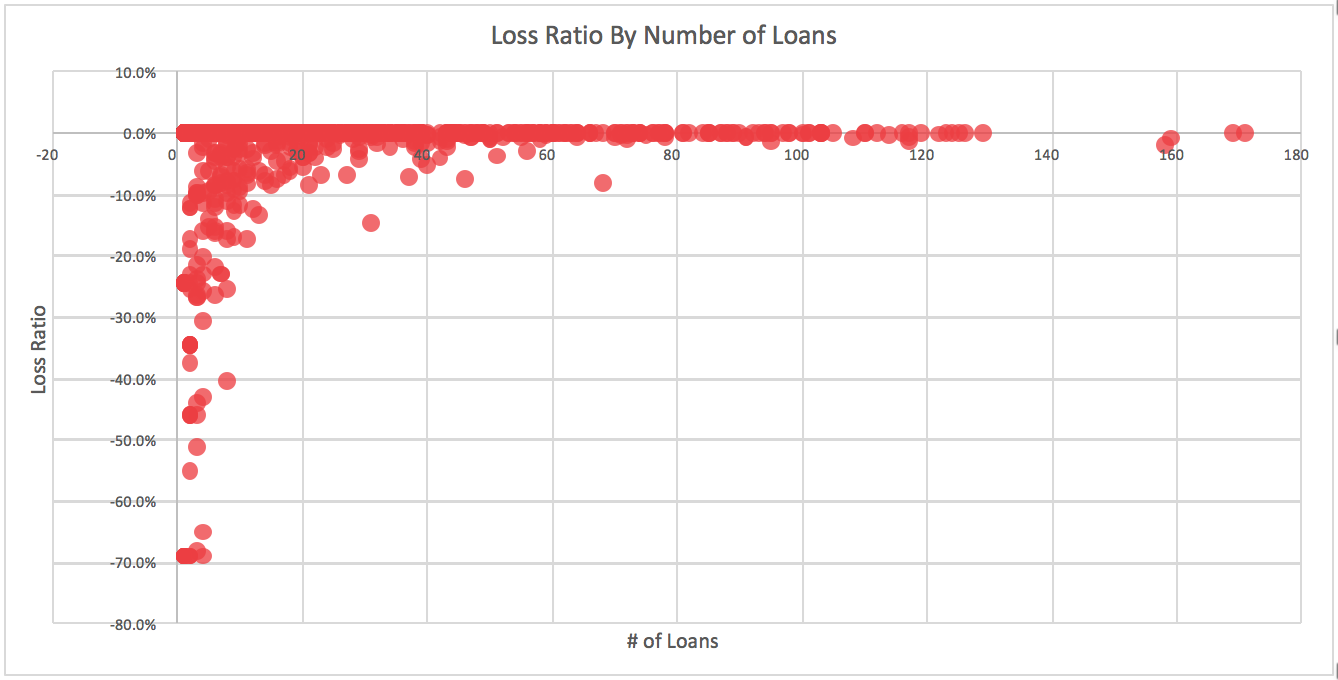 As we explained in our original analysis:

The “loss ratio” is the amount of principal lost expressed as a ratio to the principal invested. A loss ratio of -0.05, for example, would mean that $50 was lost out of every $1,000 invested. Similar to the rate of return chart, the chart above illustrates loss ratios realized by individual portfolios compared by the number of loans held in each portfolio.

A model portfolio composed of equal investments in all 209 repaid loans repaid to date would've experienced a loss ratio of -0.0045 (in percentage terms: -0.45%). This is significantly improved over the -0.74% we reported in July because we’ve repaid 82 additional loans with no loss of principal since then.

But our loss ratio on loans repaid to date doesn’t tell the whole story. What about prospective losses on loans that are past due and in workout or default? In response to feedback received in response to our original analysis, we’ve calculated an optional adjustment that investors can use to forecast their loss ratio and resulting potential net returns.

Soon, we’re planning to post a blog about workouts and defaults to explain some of the differences and implications for investors. For now, let’s look at the performance numbers for loans in these situations that have since been resolved:

In aggregate, Groundfloor investors currently hold 30 loans that are past due. Of these, 9 are in “workout” and 21 have been declared in “default.” Our new adjustment for prospective losses adds these loans to the analysis as though they had been resolved and repaid in line with our historical performance in recovering principal and interest for loans in these categories. For the adjusted model portfolio of 239 loans, this adjustment would add -0.15% to the loss percentage, for a total loss percentage overall of -0.60% and an expected net return of 10.56%.

This does not mean that every loan in default should be expected to lose any specific amount of principal. The actual loss on any specific loan may be more, less or none at all. For example, since putting together this analysis and prior to publication, our defaulted loan for 1649 West Garfield Boulevard repaid with full principal and interest on January 4, 2018 with a 14.3% return. Investors received 17.4% for 117 days during the default period. This loan was in the process of foreclosure, but was successfully repaid.

Groundfloor believes everyone ought to be free to choose, that all investment dollars deserve equal opportunity. As Voltaire and Peter Parker’s Uncle Ben in Spiderman said, “With great power comes great responsibility.” We’ve created a product that allows investors to benefit from diversification, without requiring that you do, or dictating how your investment should be diversified. That part is up to you.

We share this kind of information to help ensure our investors’ success. If you have any questions or comments about this report, do not hesitate to reach out to us. You can comment below, tweet to @groundfloor_us or send an email to support@groundfloor.us.